The Great Depression has come and gone, and the city is slowly returning to life. Rockefeller Center was built and the American Ballet Theatre was opened. The High School of Music & Art was also spearheaded by popular mayor Fiorello H. LaGuardia – a sign and symbol of the city’s investment in its youth. New York also would continue to establish its legacy as a major world center with the opening of the Ford Foundation Headquarters and the first World’s Fair. 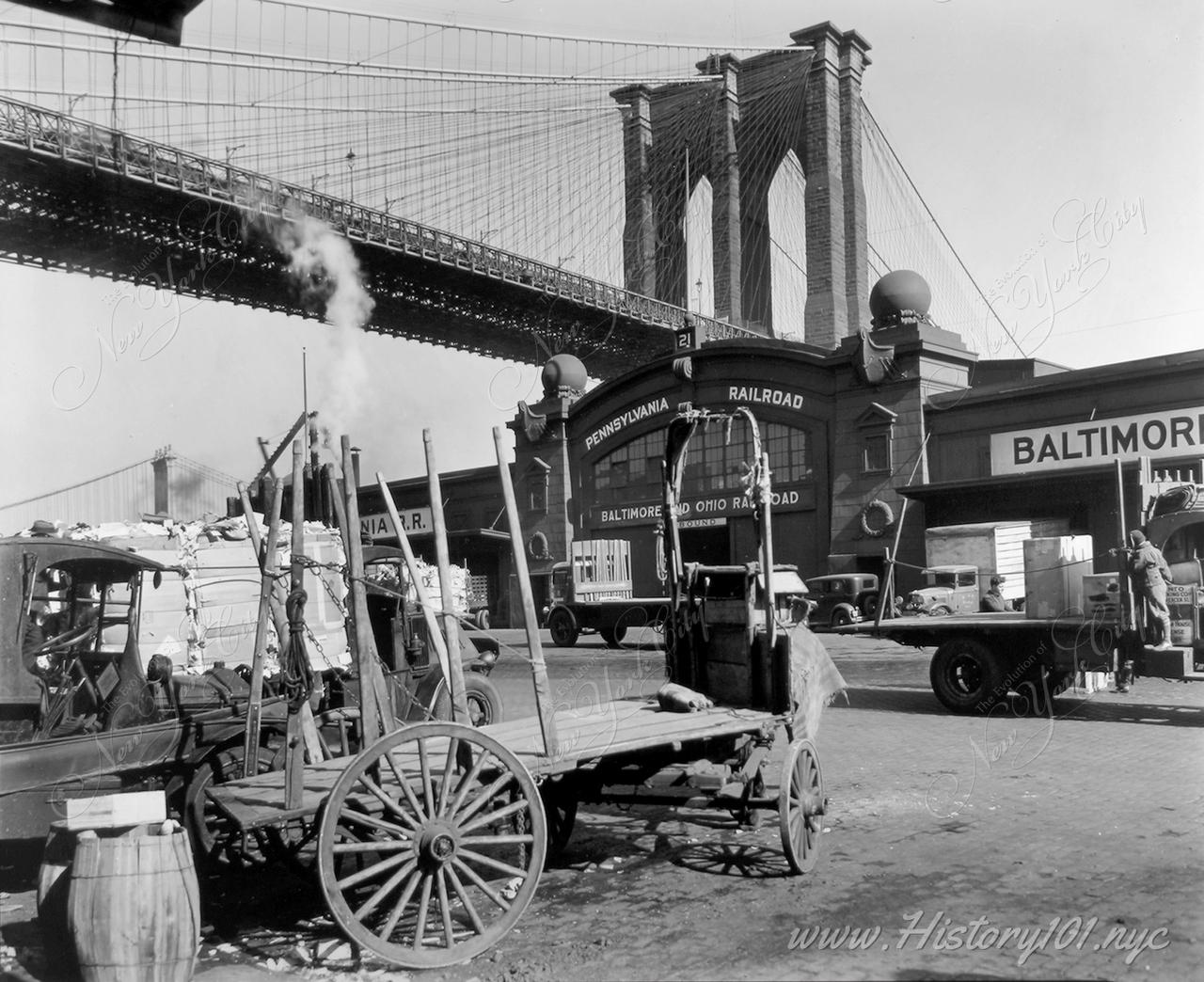 Photograph of trucks and wagons parked on Pier 21 at the Brooklyn Bridge on the Manhattan side. 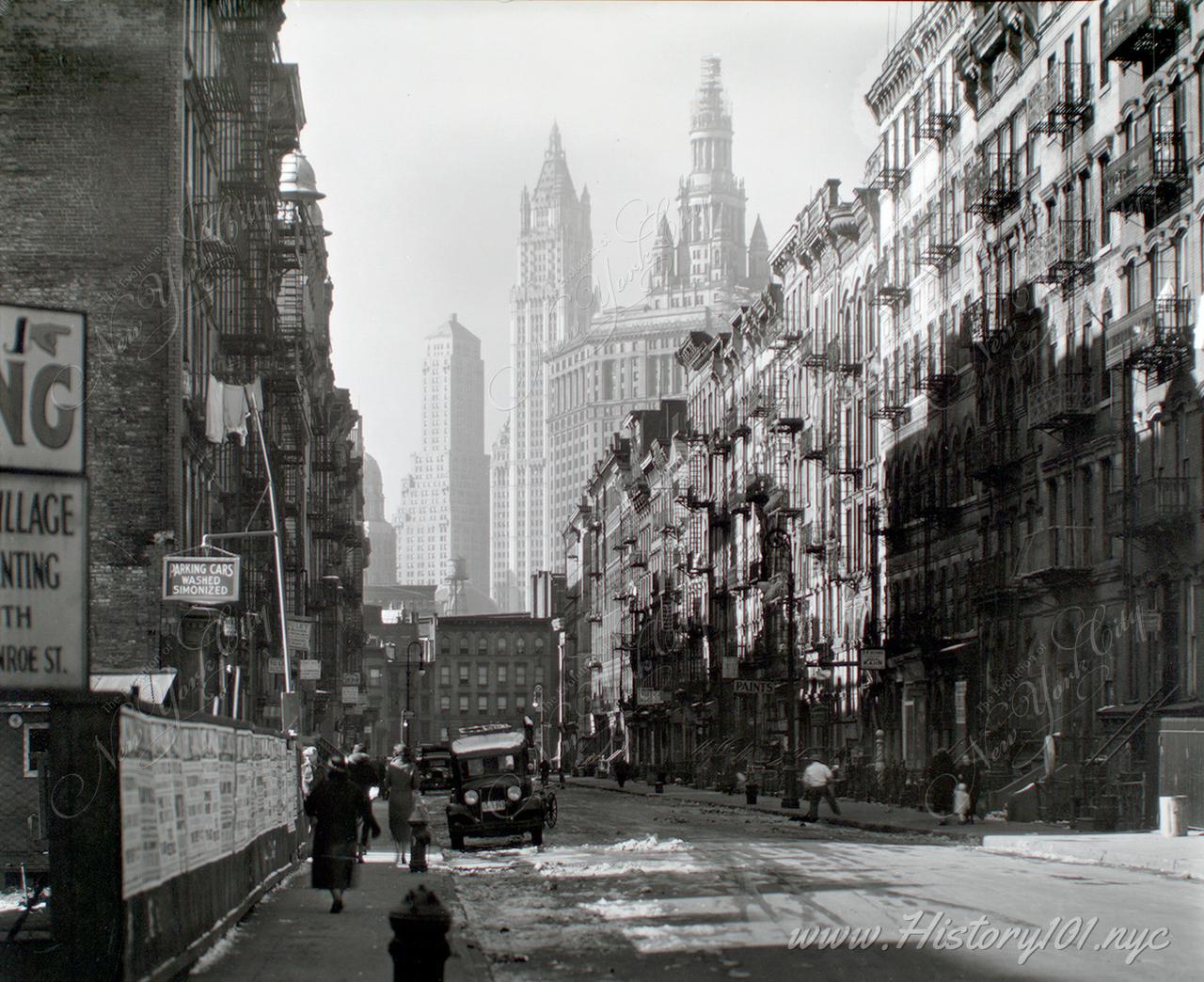 1935: Henry Street and the Downtown Skyline

A street level view of Henry Street and Manhattan's growing skyline. City Hall and the Woolworth Building are visible in the distance. 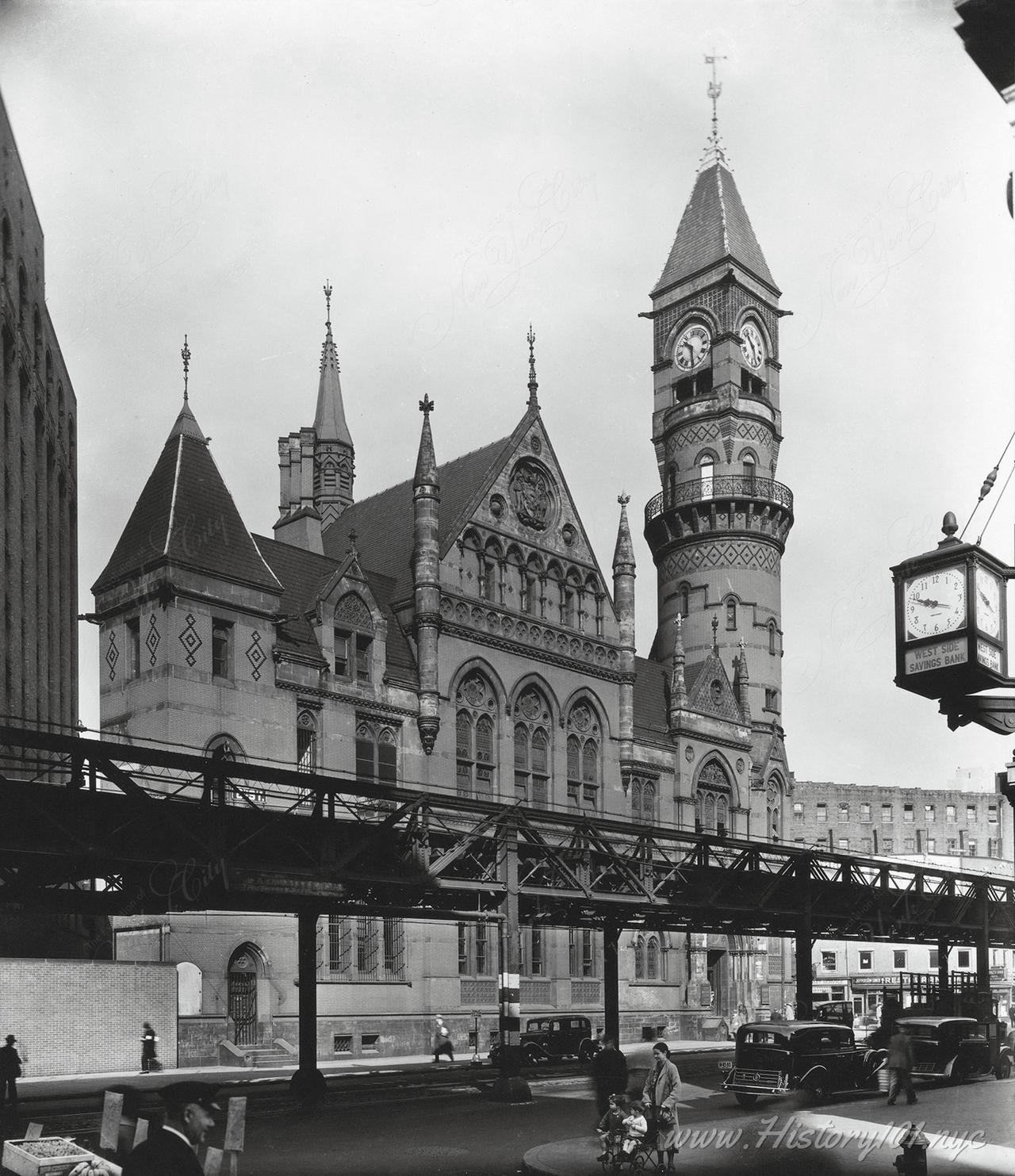 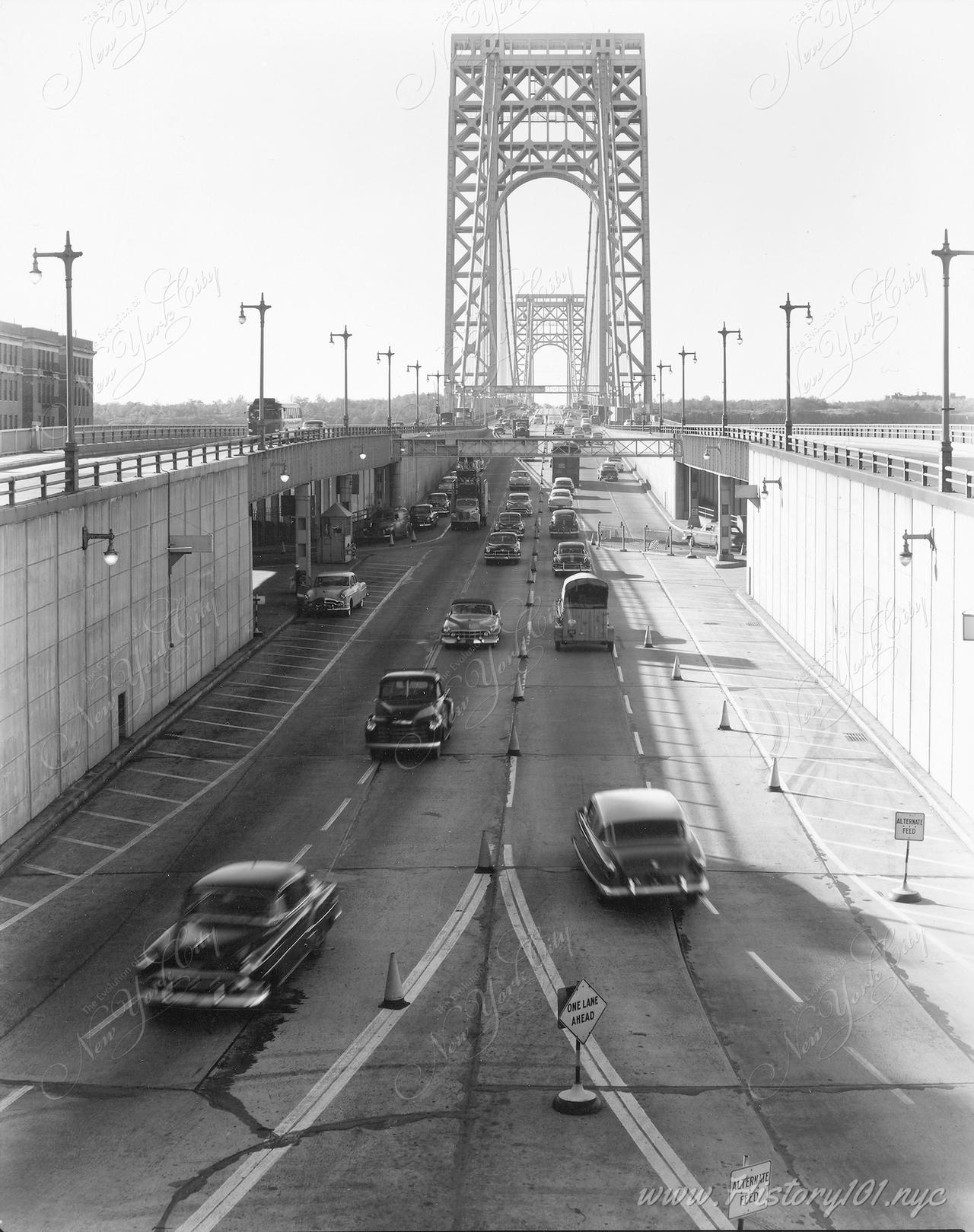 Photograph shows inbound and outbound traffic at the Manhattan side entrance of the George Washington Bridge, which was built in 1927. 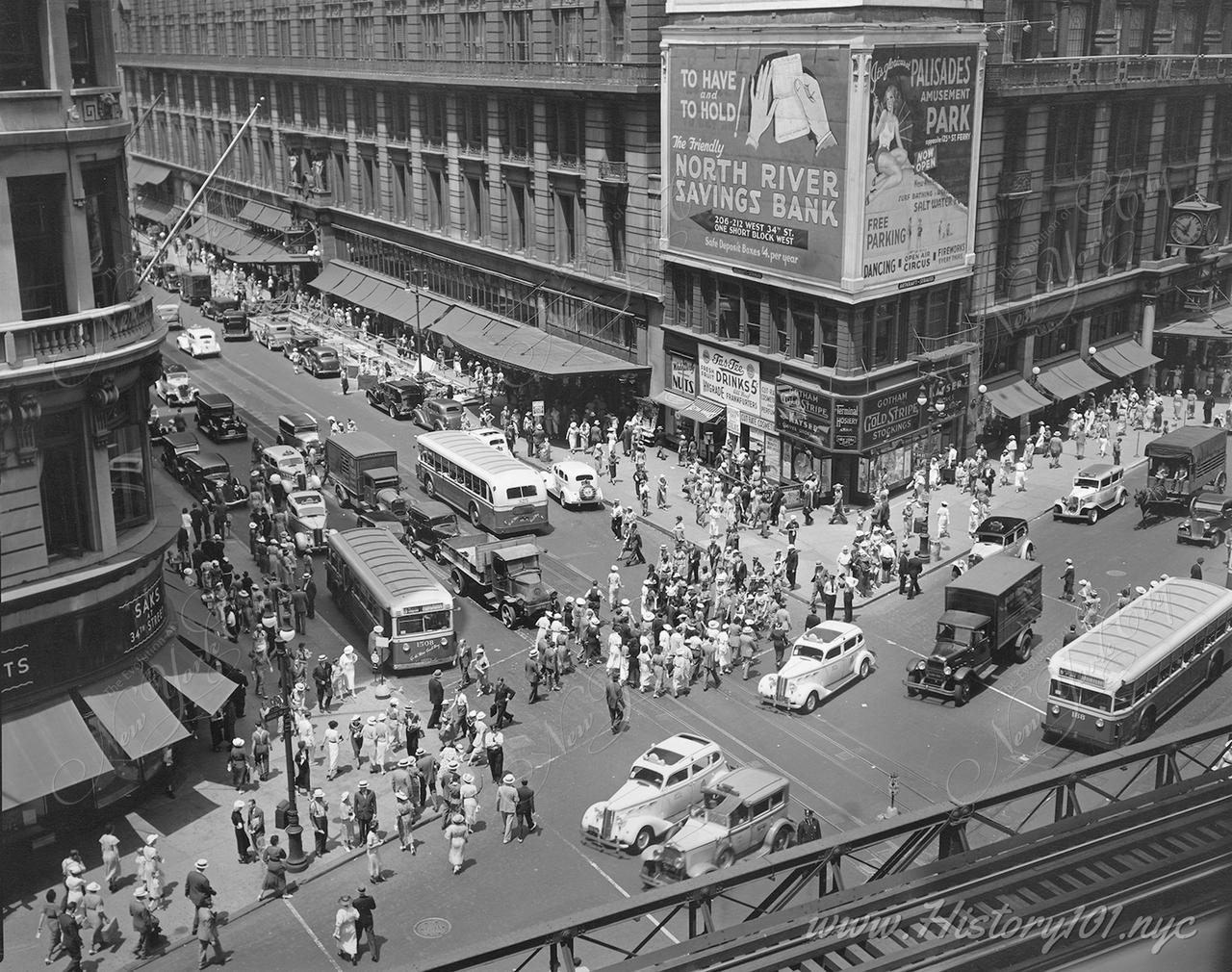 An overhead view of Herald Square the corner of 34th Street and Broadway showing cars, pedestrians and elevated railroad tracks in the foreground. 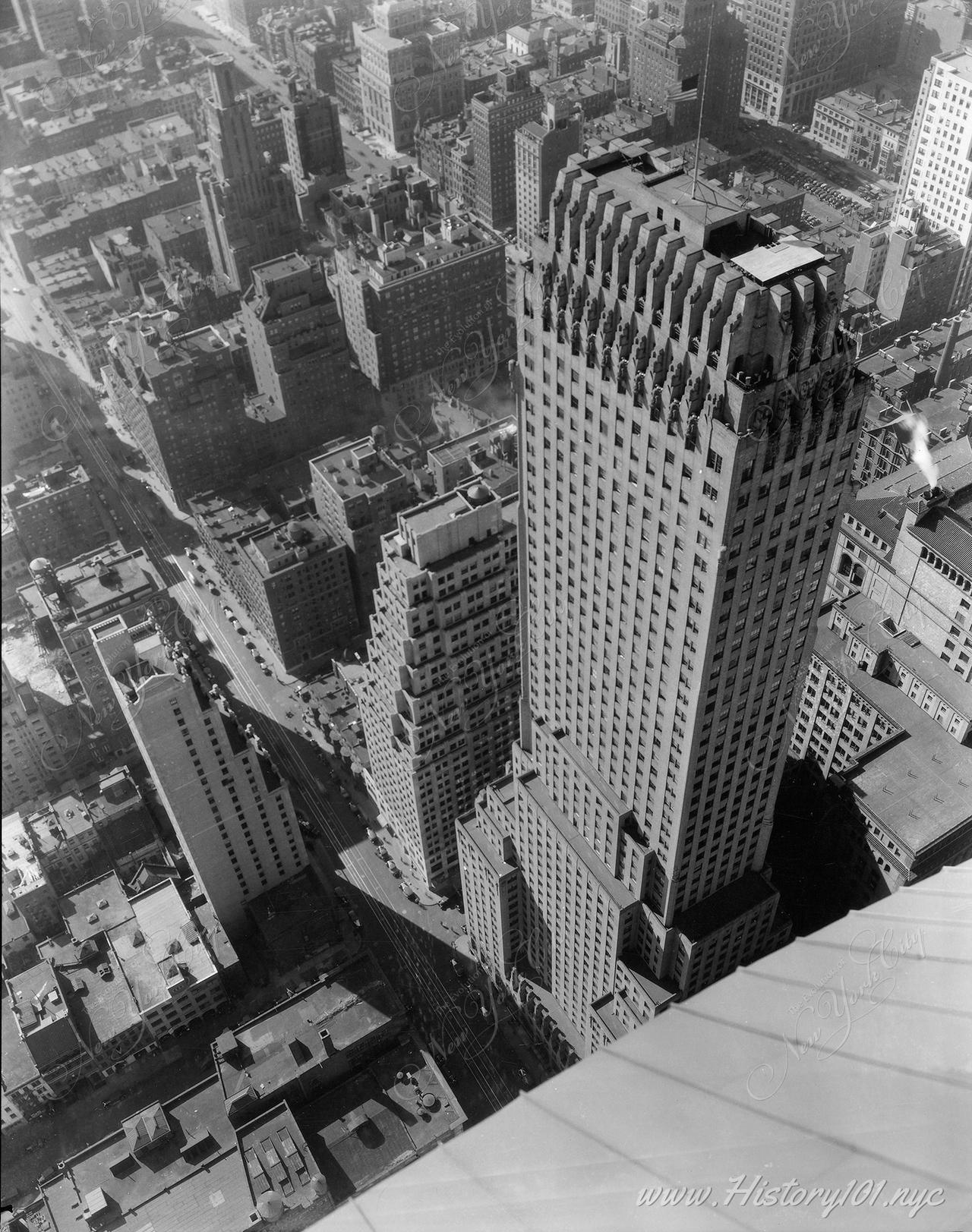 Photograph of the Chanin Building and midtown Manhattan from a bird's eye perspective, taken from the Chrysler Building. 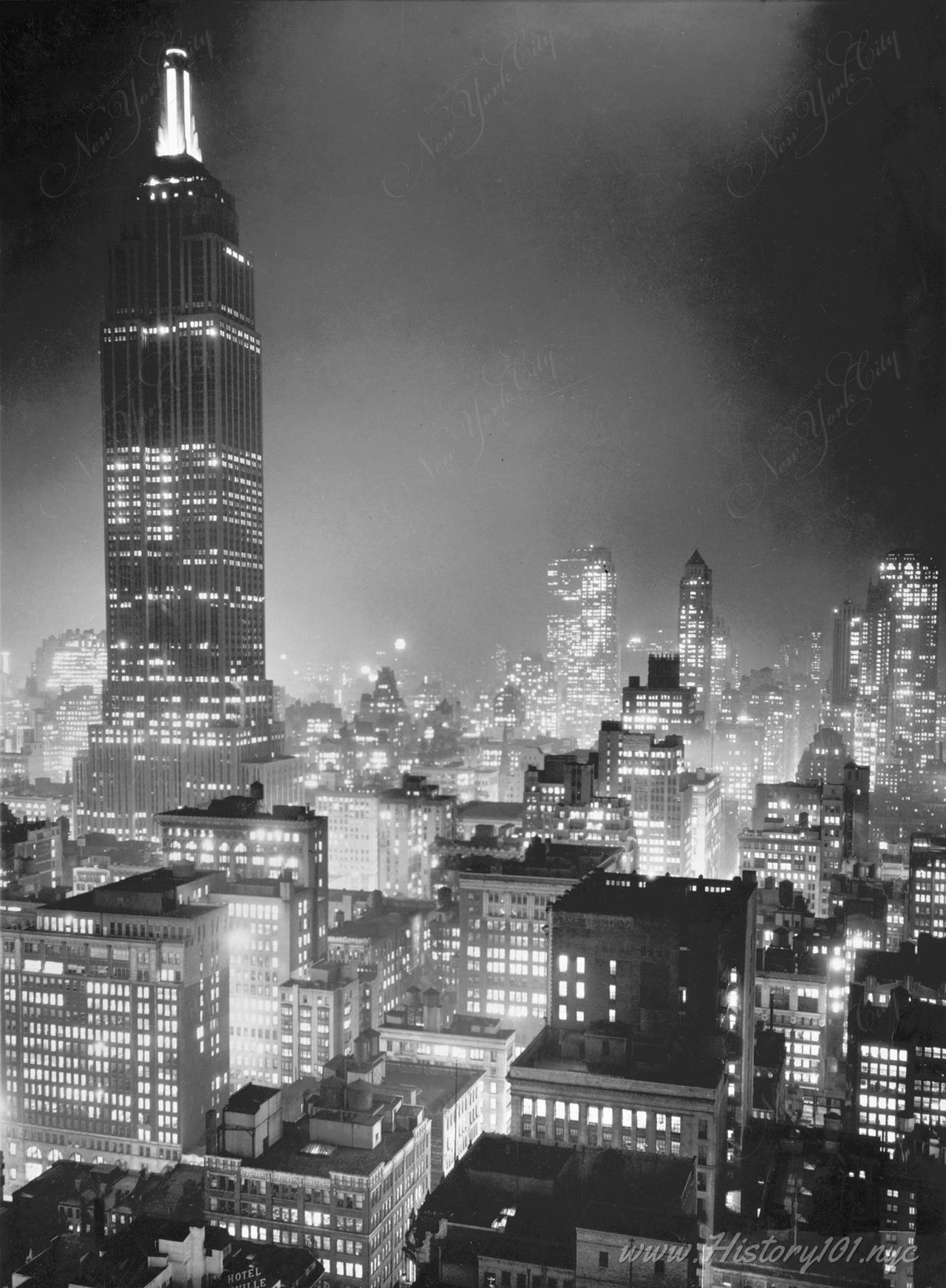 Photograph of the Empire State Building and surrounding skyscrapers illuminated at night. 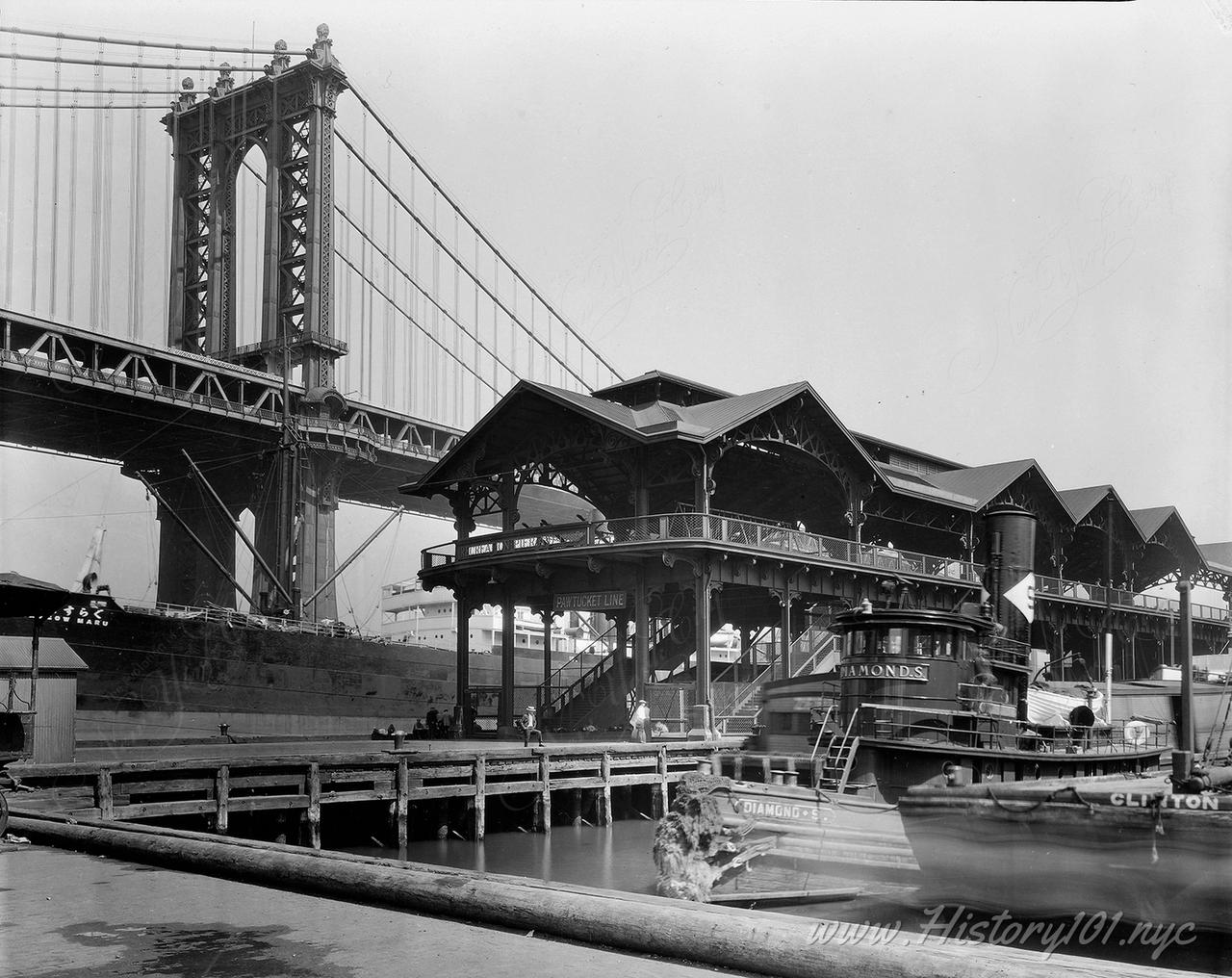 Photograph of a Recreation Area with various boats docked in front with the Manhattan Bridge in the background. 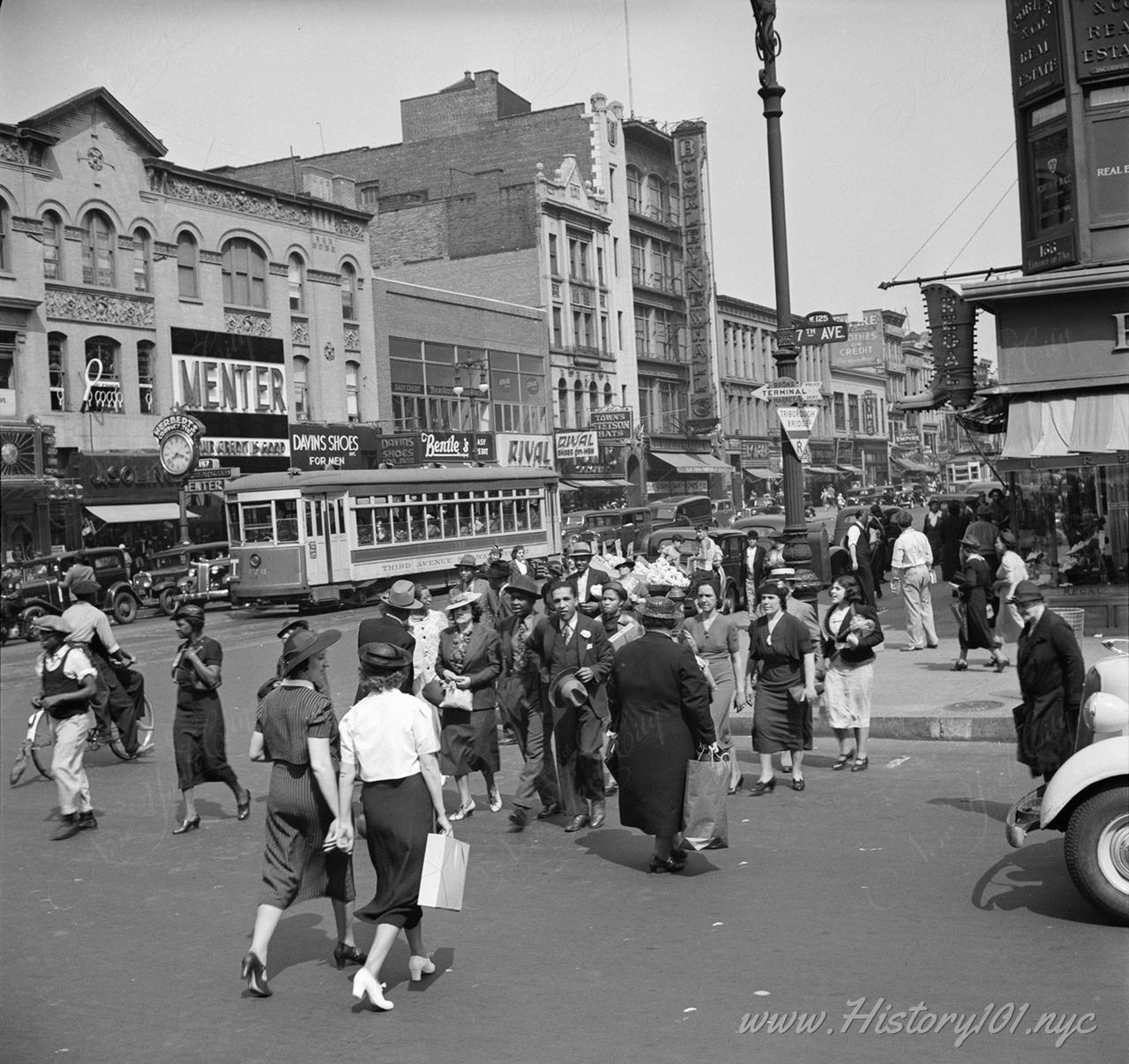 Photograph of traffic and pedestrians on the corner of 125th Street and 7th Avenue in Harlem. 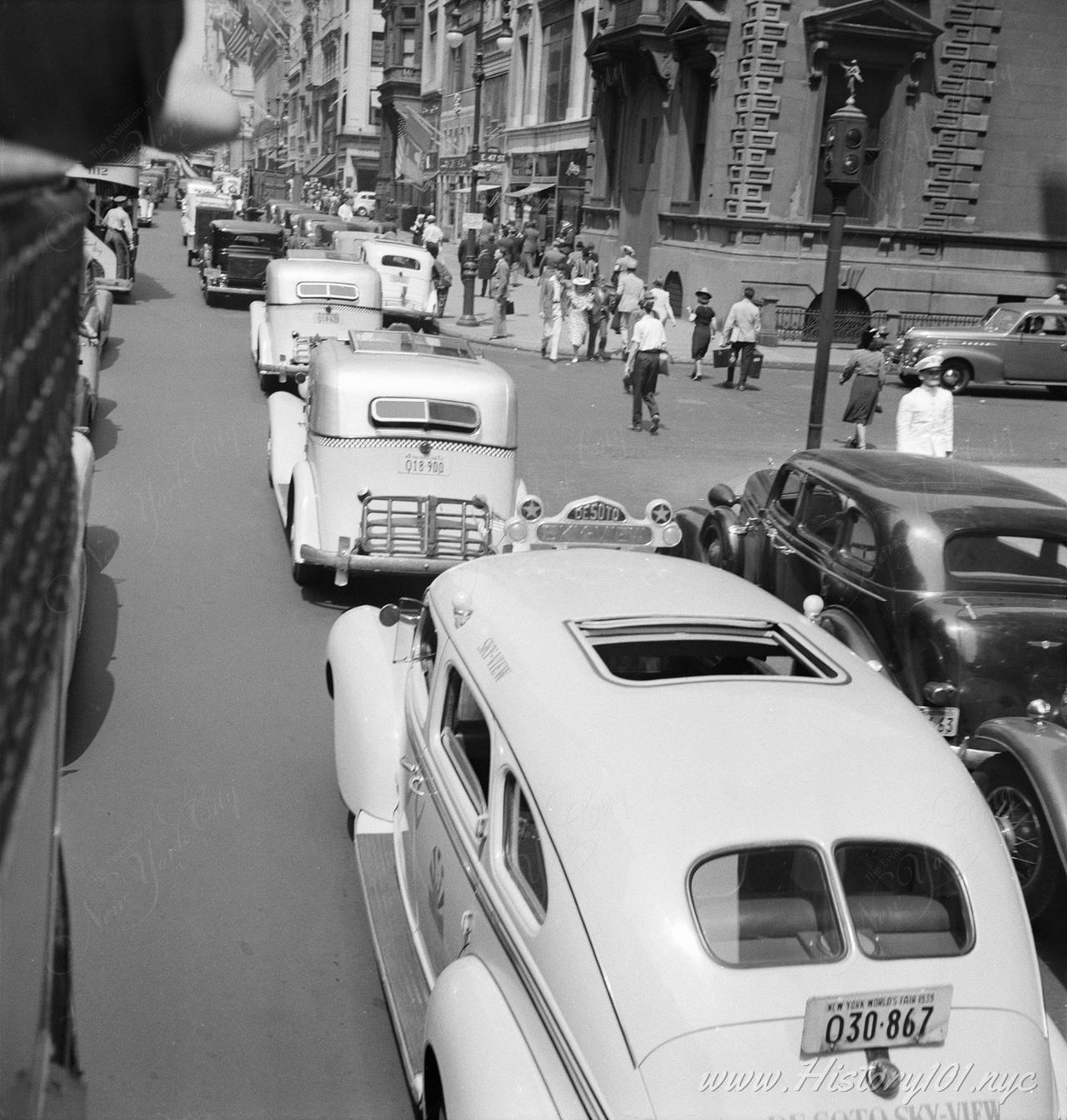 Photograph of Fifth Avenue traffic approaching 47th Street in the middle of the day.

Aerial photograph of cars and toll booths at the Entrance Plaza to the Holland Tunnel. 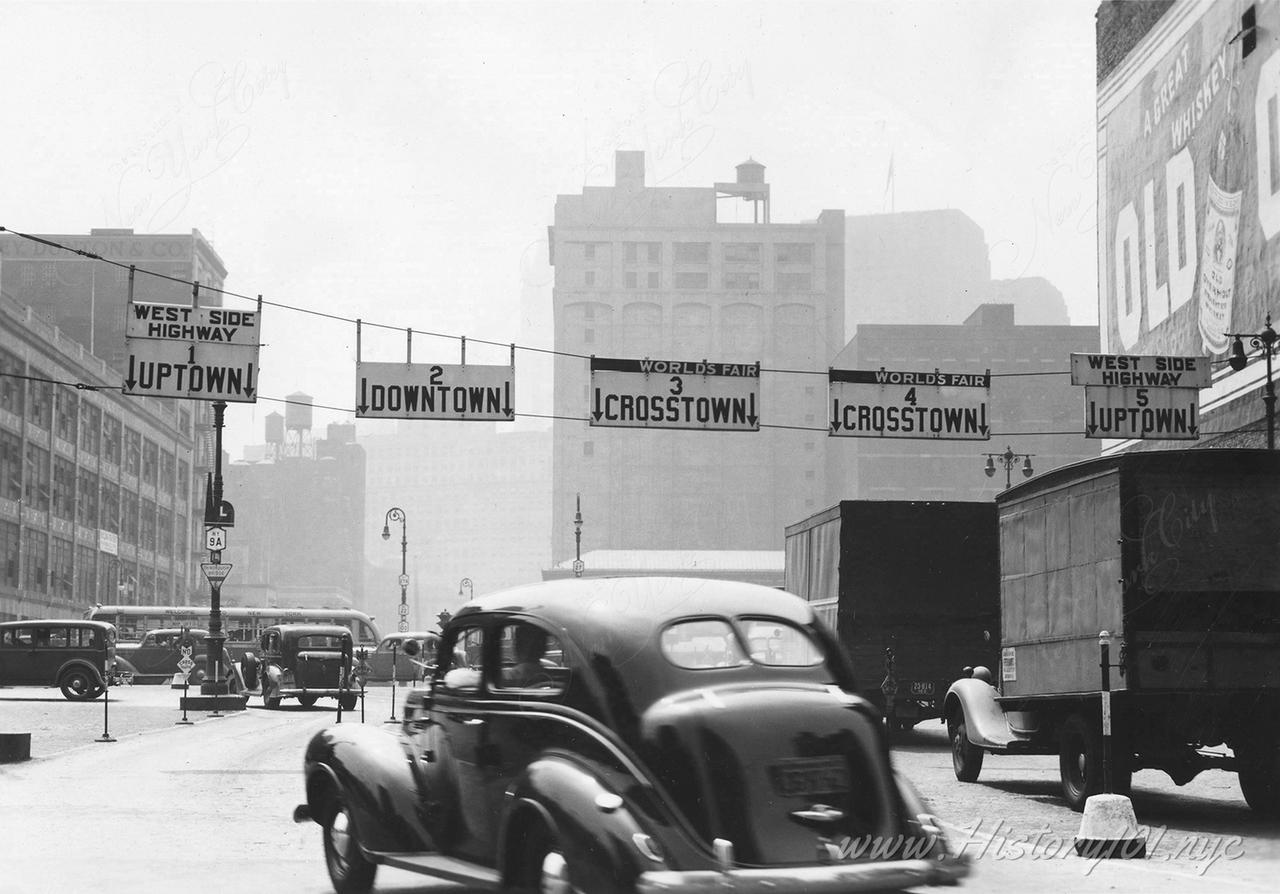 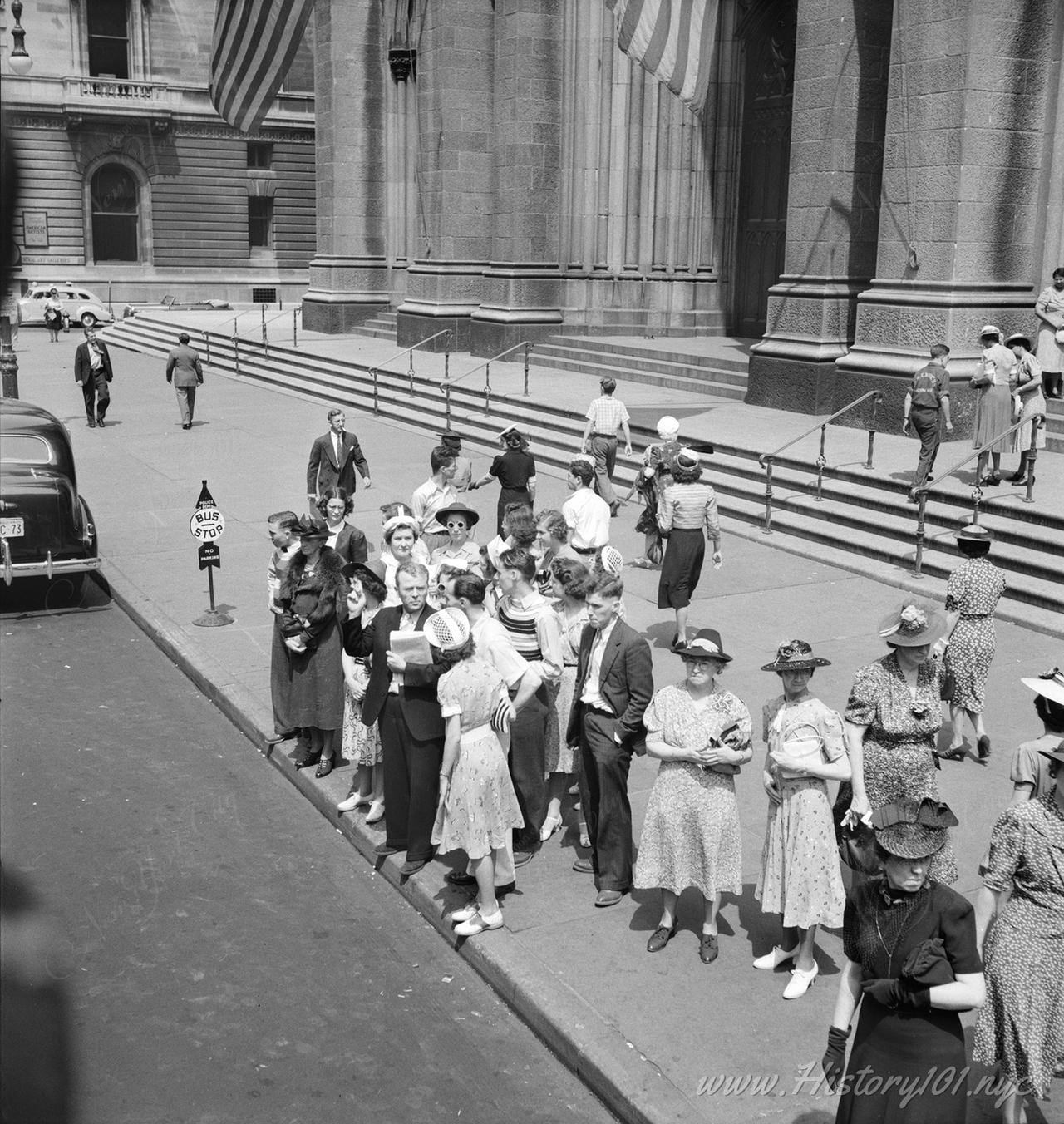 Photograph of New Yorkers waiting for an uptown bus in front of Saint Patrick's Cathedral.

A bird's eye view of the Woolworth Building towering above City Hall Park on a partly cloudy day.