In 1870, Long Island City was formed in Queens. Four years later, New York City annexed the West Bronx, west of the Bronx River. This era would come to be known as “the Gilded Age” – a time of radical progress but also great instability as the city’s population continued to grow beyond its capacity. This era would also see the nation’s first Centennial Anniversary, which was the cause of much fanfare and festivities as America reached a new milestone.

Click Here to View All 29 Images on One Page 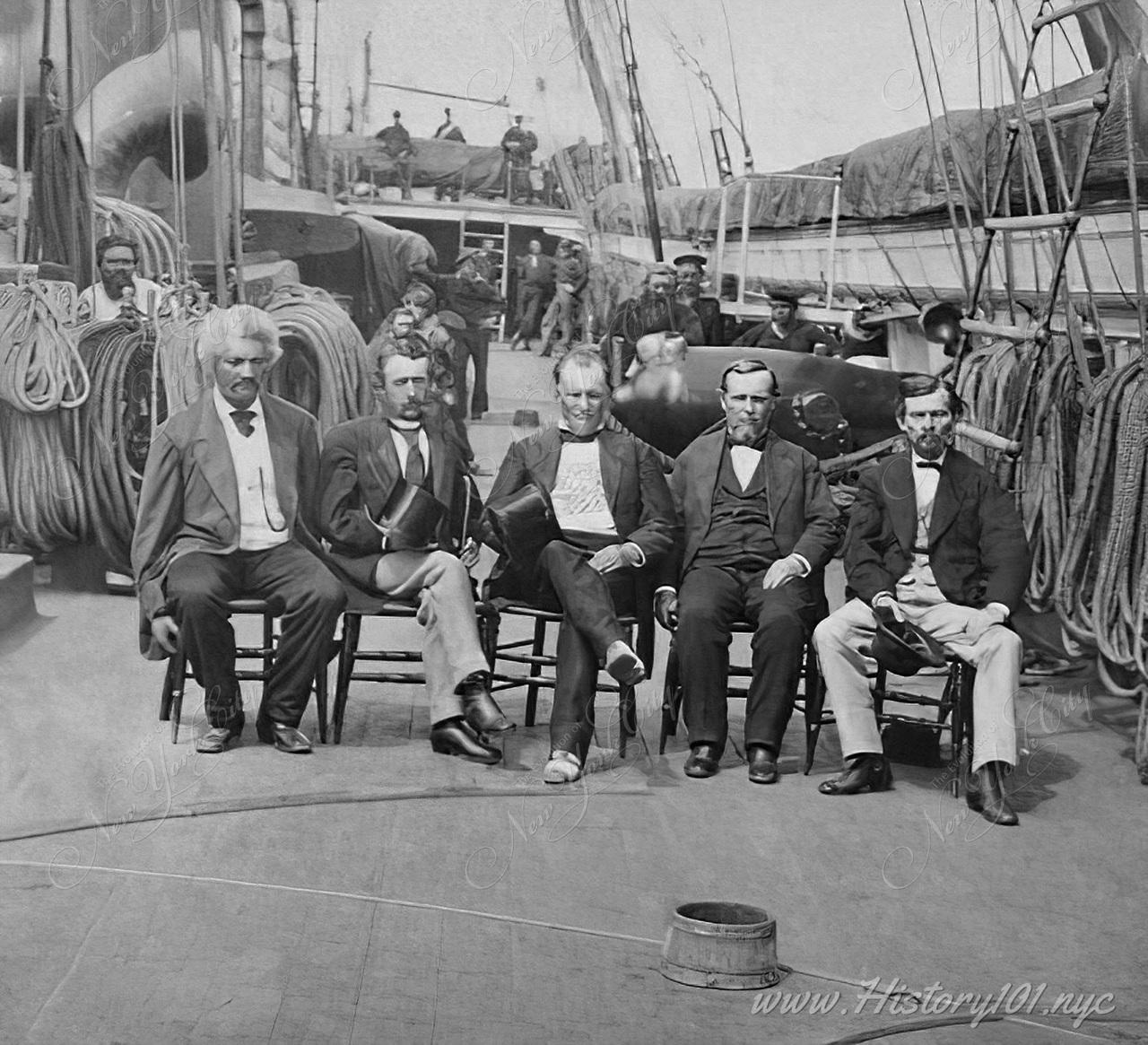 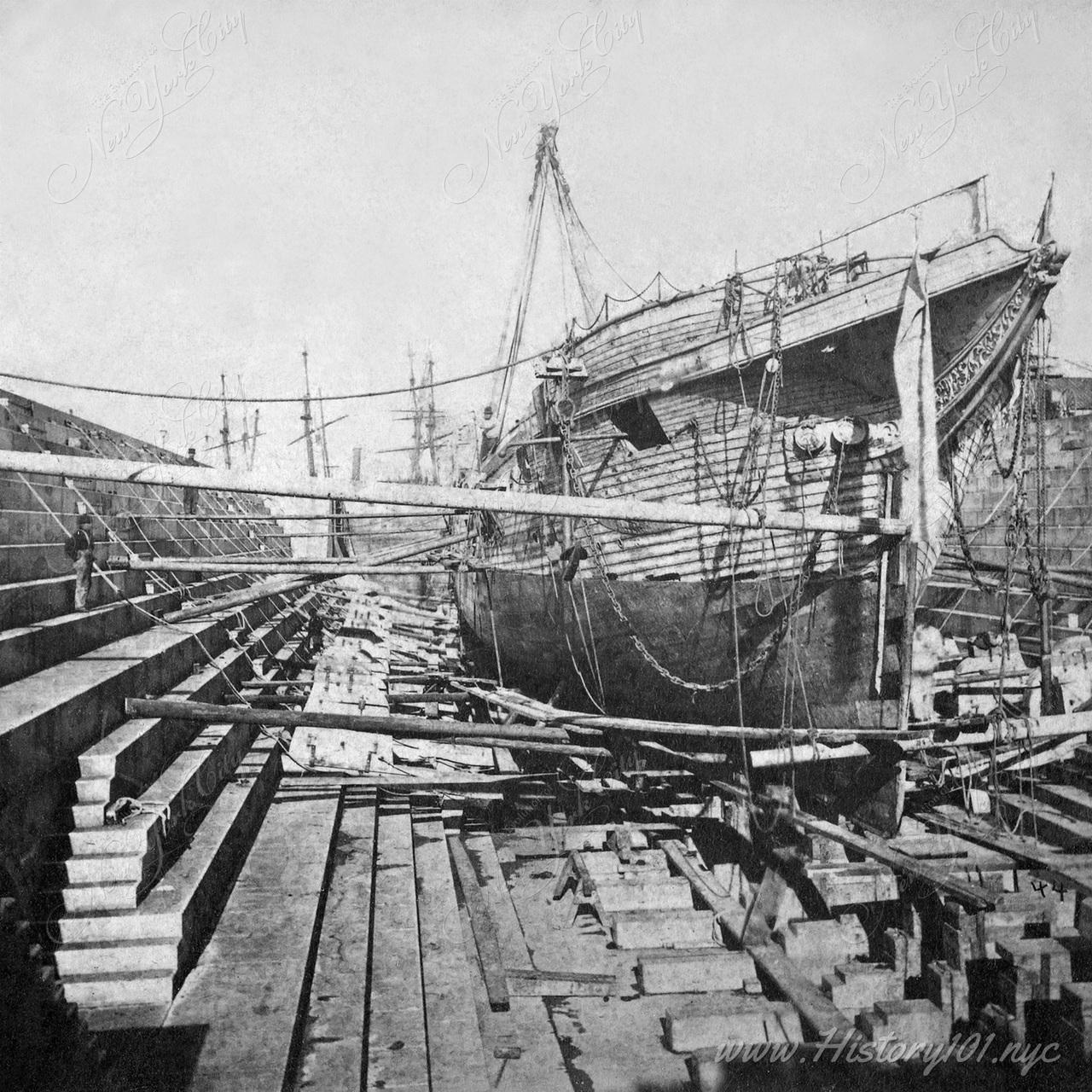 Silver photographic print of Brooklyn Navy Yard dry dock, which will be flooded as soon as the ship is completed and seaworthy. 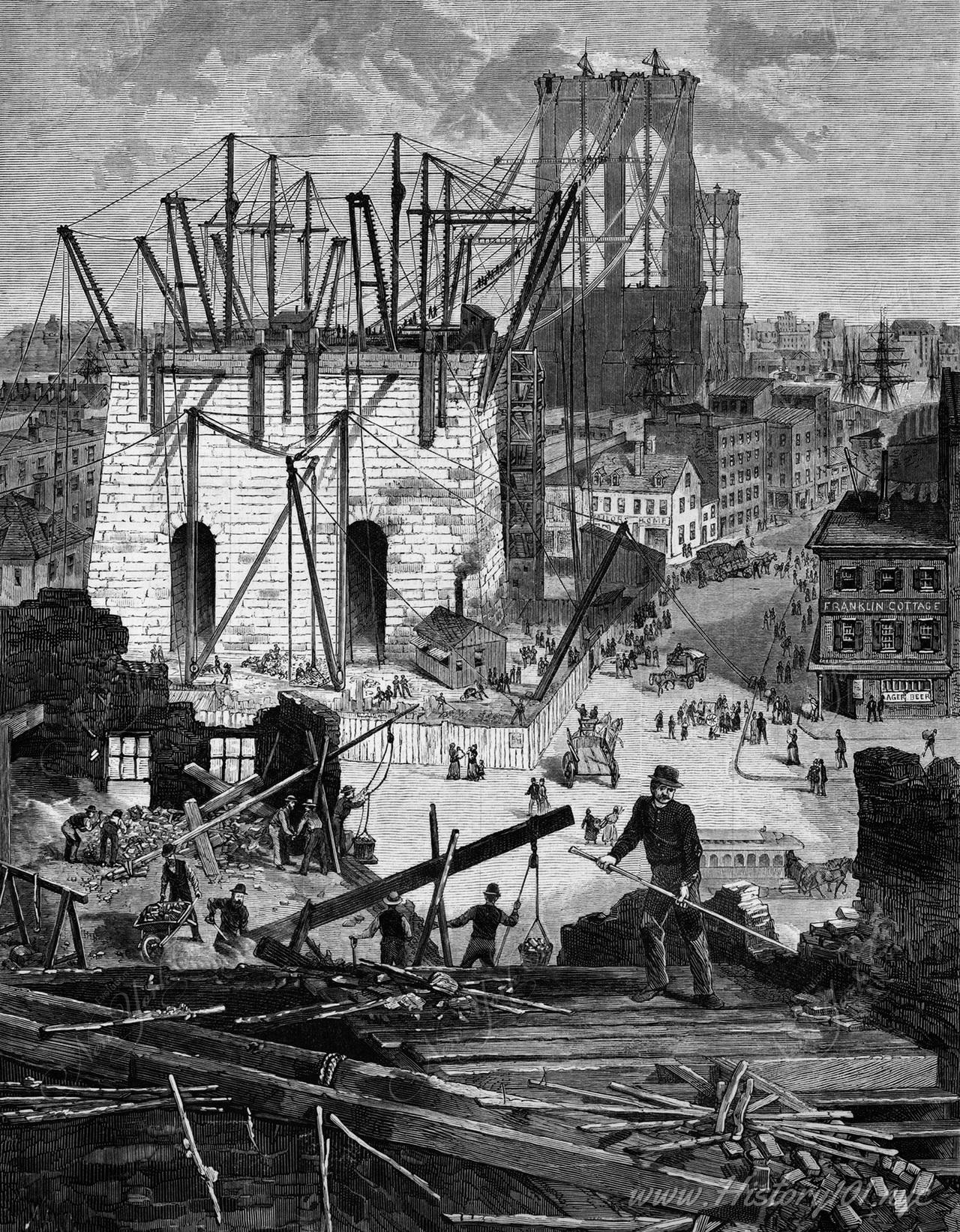 Artist's rendering of numerous buildings in Manhattan which were demolished to clear a path for the the East River Bridge, known today as the Brooklyn Bridge. 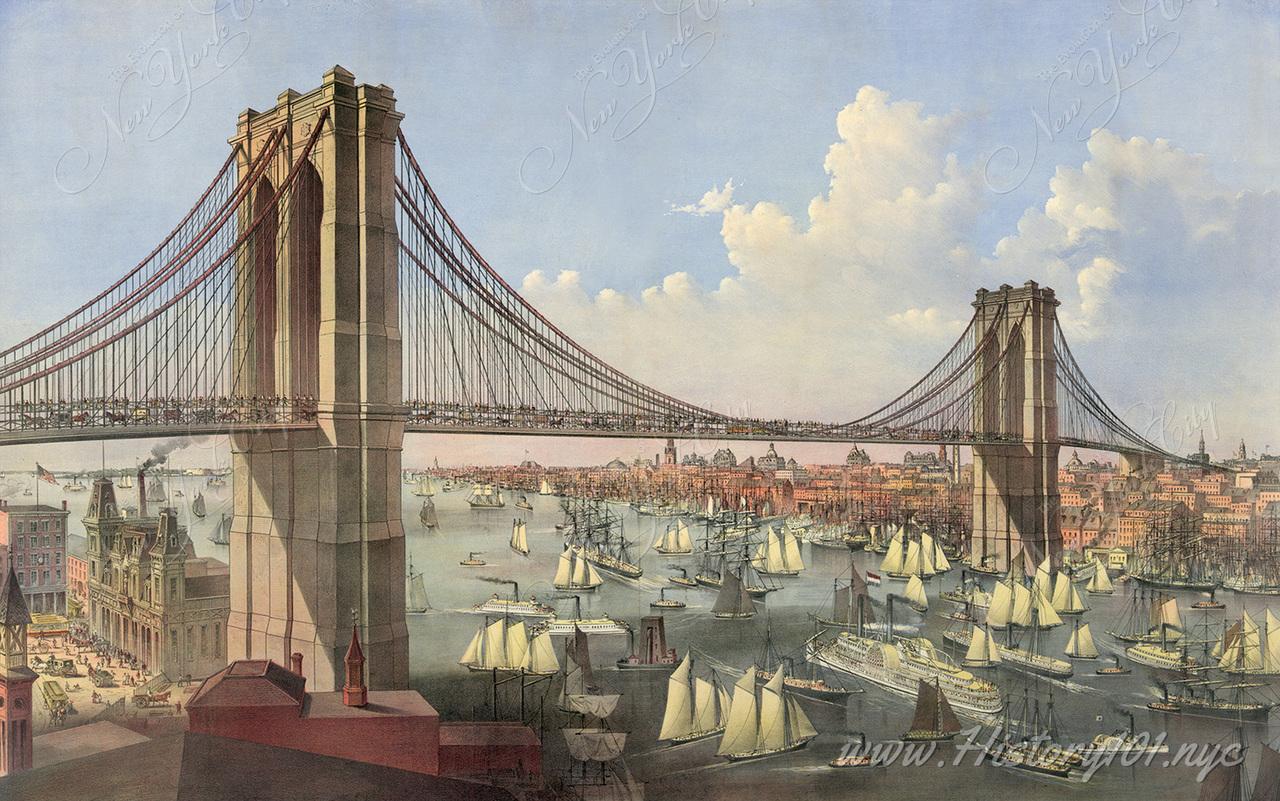 A color lithograph of what we know today as the Brooklyn Bridge, which was constructed over the course of this decade. 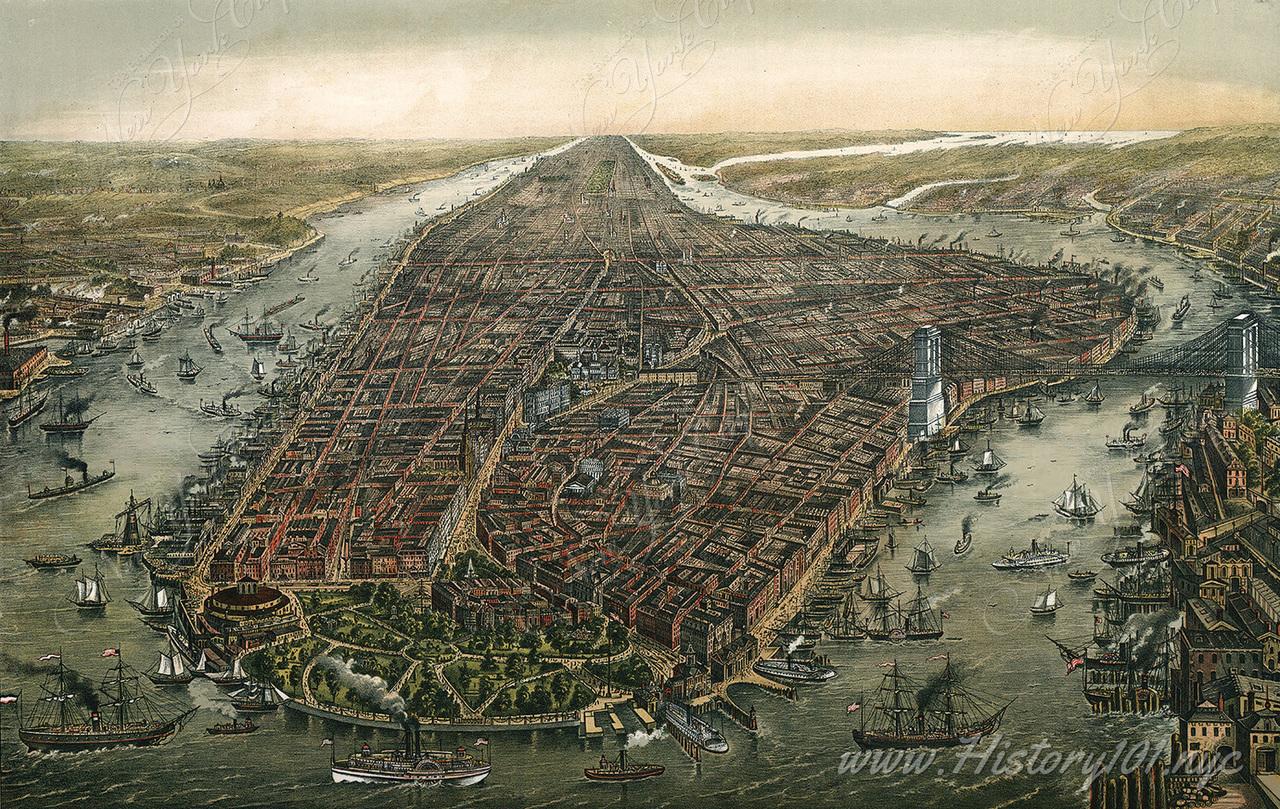 1873: Downtown Manhattan from Above

A bird's-eye view of New York with Battery Park in the foreground and the Brooklyn Bridge on the right. 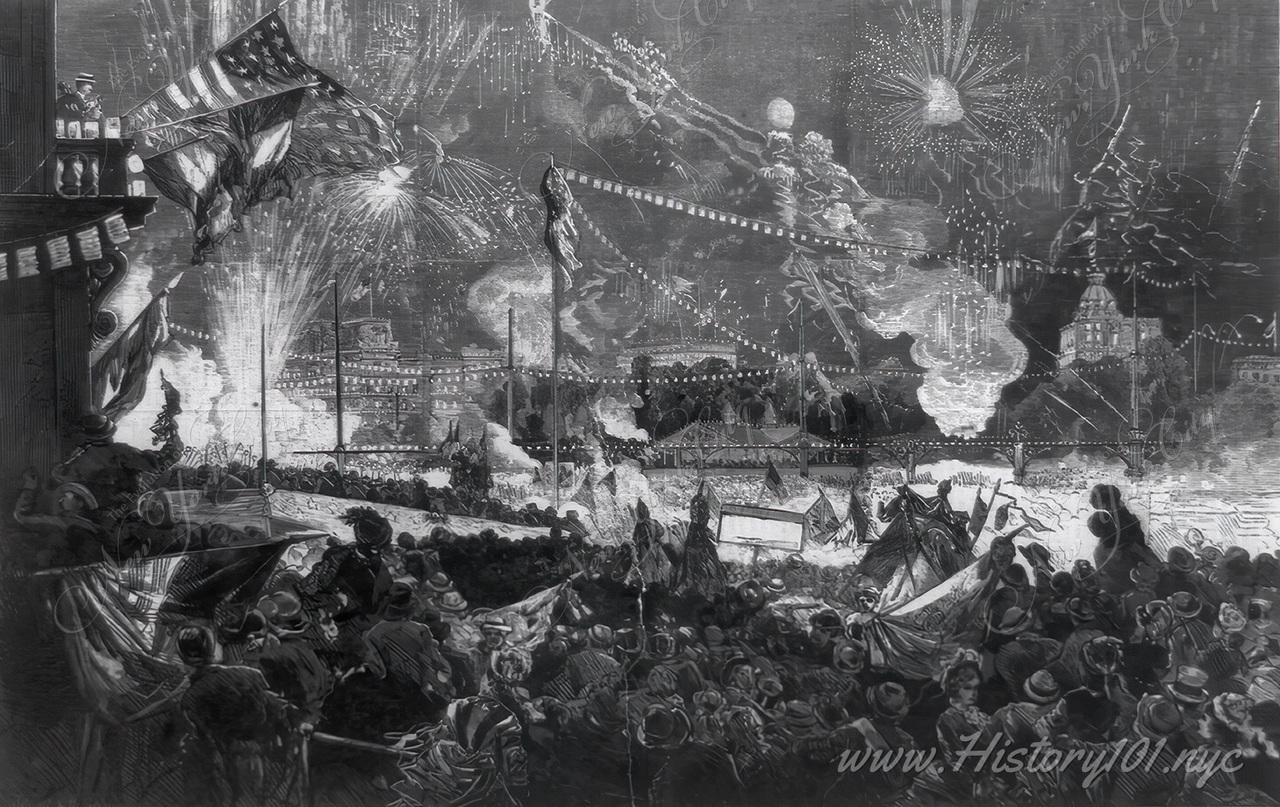 1876: The Centennial 4th of July at Union Square

A drawing which shows a night of celebration in Union Square on July 4th, 1876, exactly 100 years since the nation's founding. 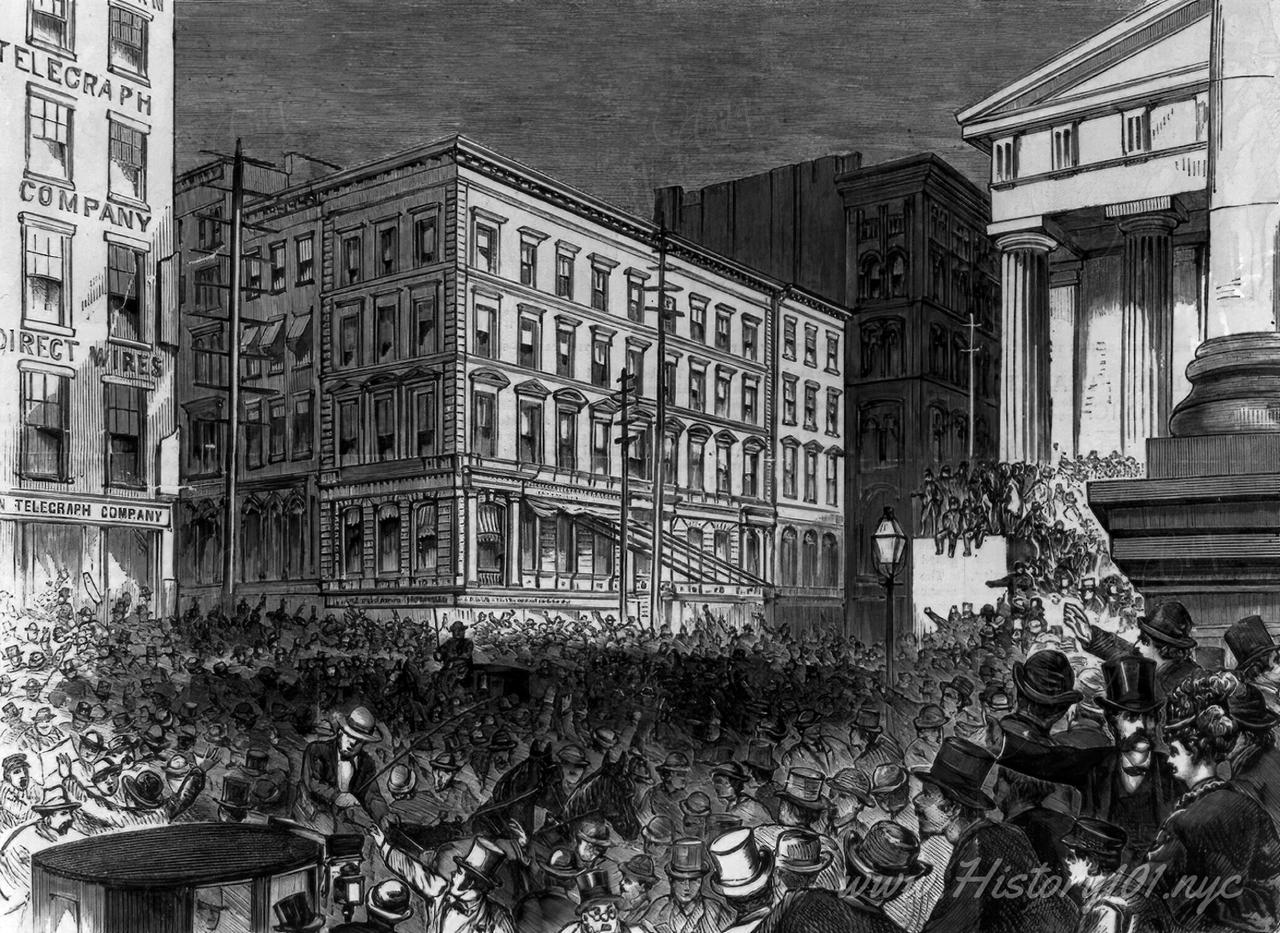 Illustration depicting the sub-treasury overrun by the public on Friday Sept. 19th at the Intersection of Nassau and Broad Streets with Wall Street. 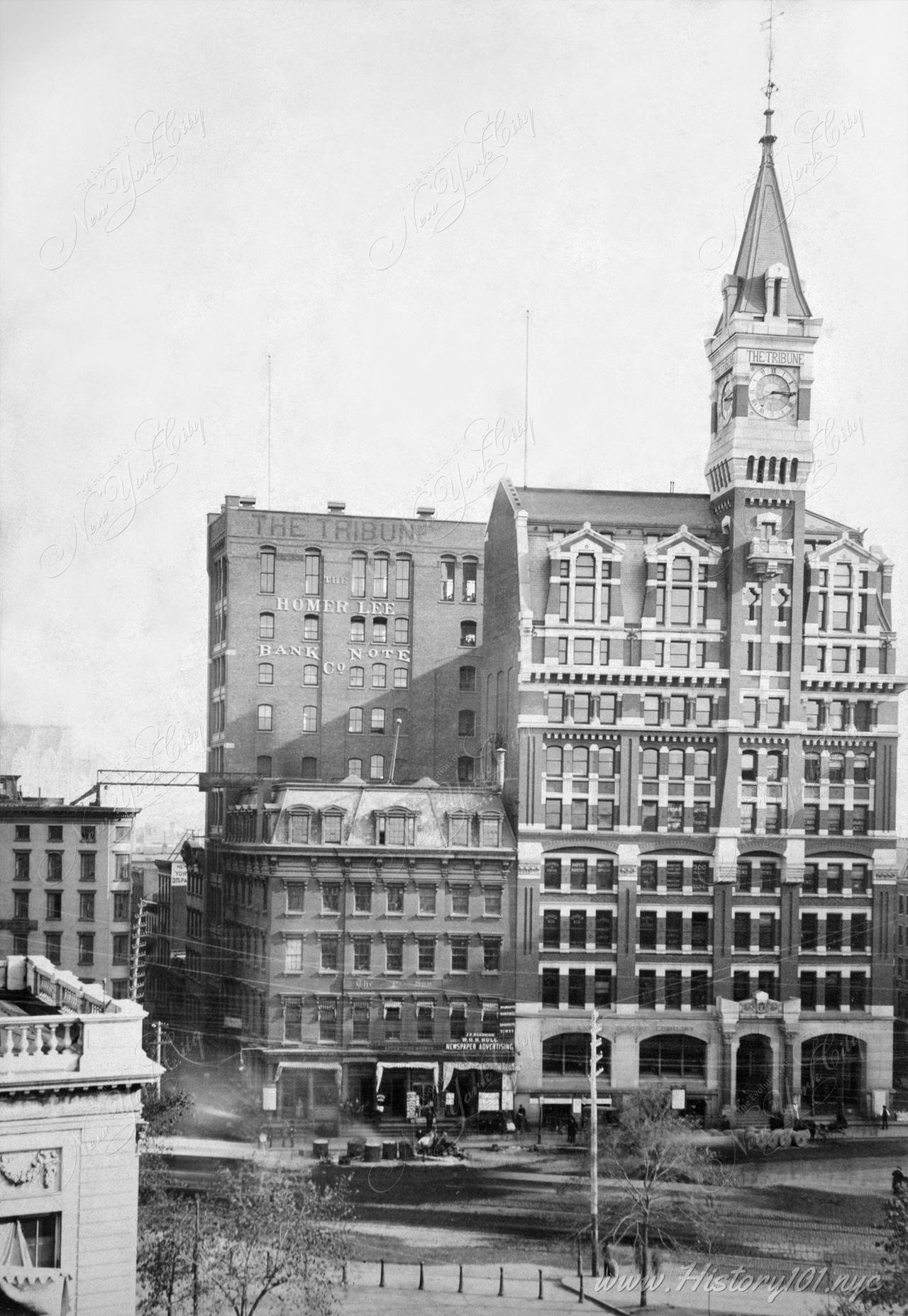 The Tribune Building, on the site of two previous Tribune buildings, was announced in 1873 and completed in 1875 to designs by Richard Morris Hunt. 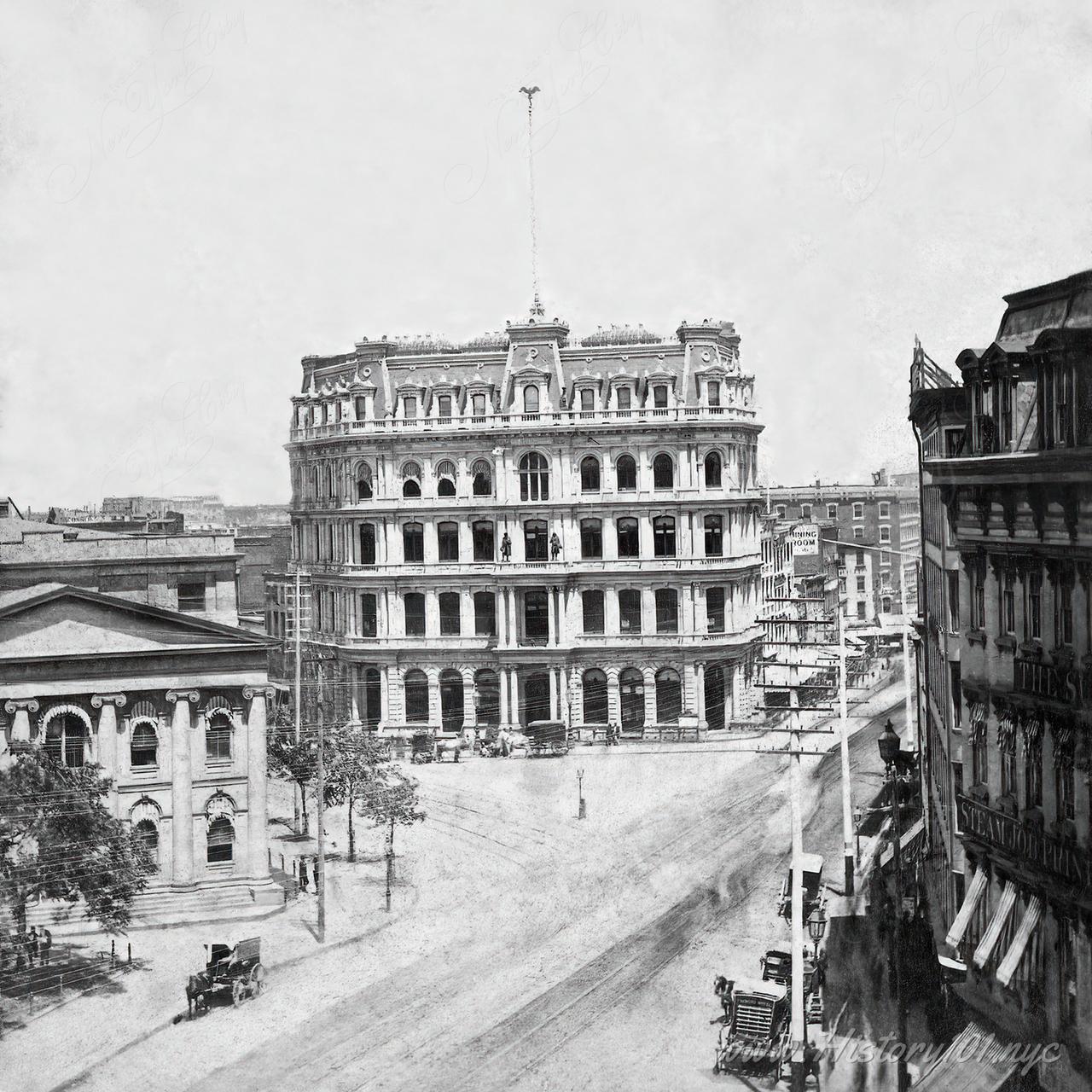 The Staats-Zeitung Building was the headquarters of a German newspaper located in what was referred to as Printing House Square due to the number of publishers. 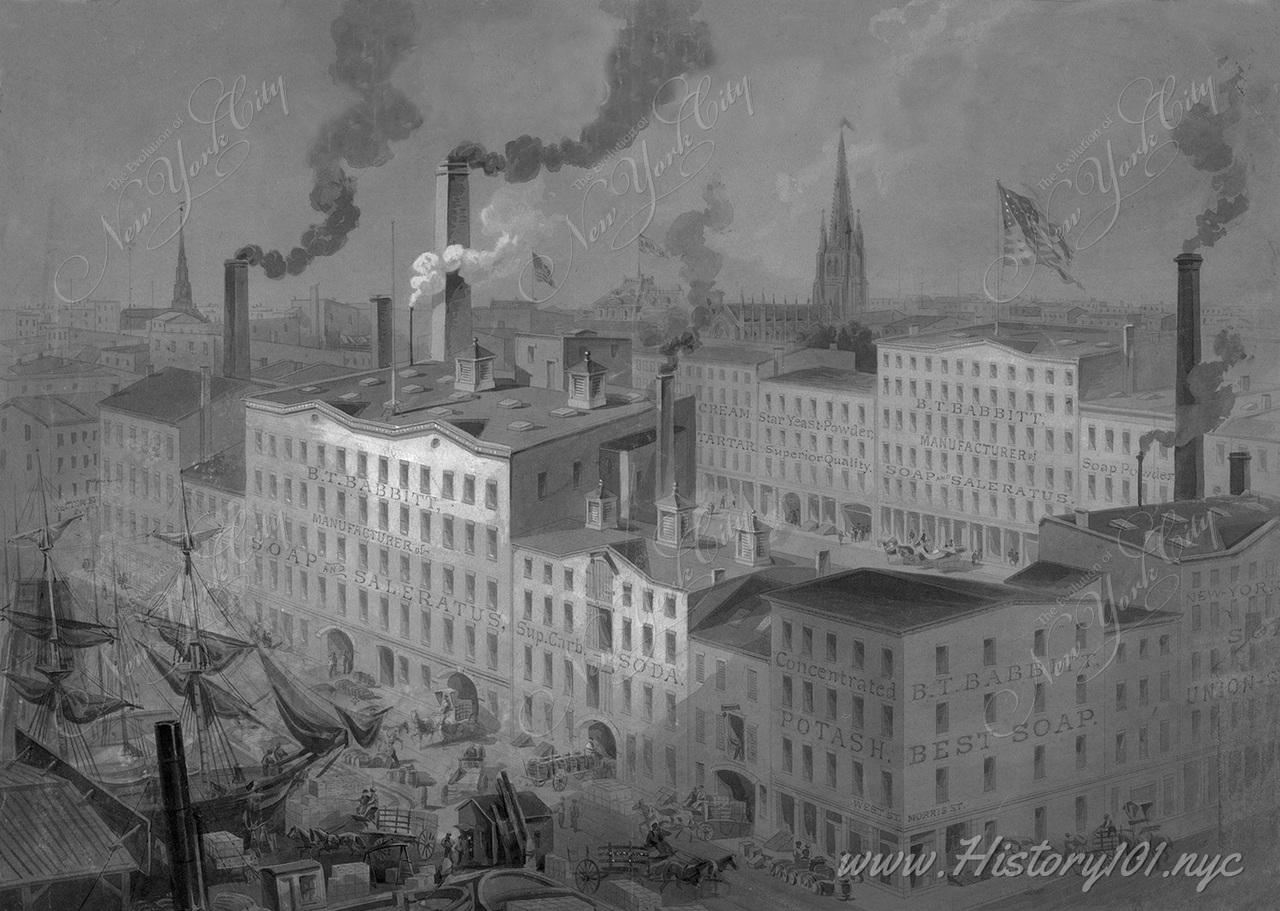 Drawing by James A. Shearman featuring a soap factory in lower Manhattan, from West St. looking northeast, with the Equitable Building in the background. 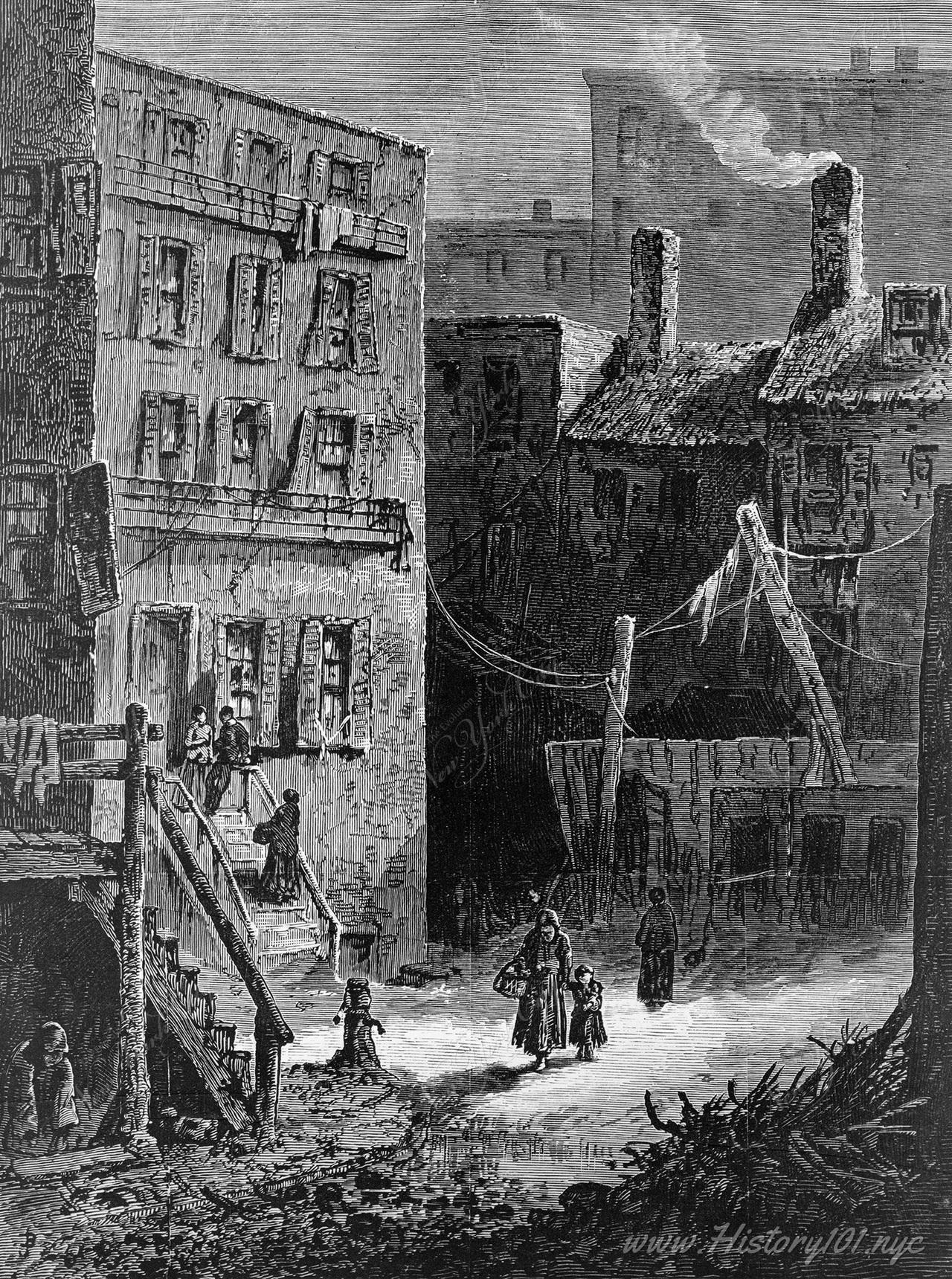 Life sketches in the metropolis depicting the city's homeless poor during the early morning hours in Donovan Lane, near the Five Points. 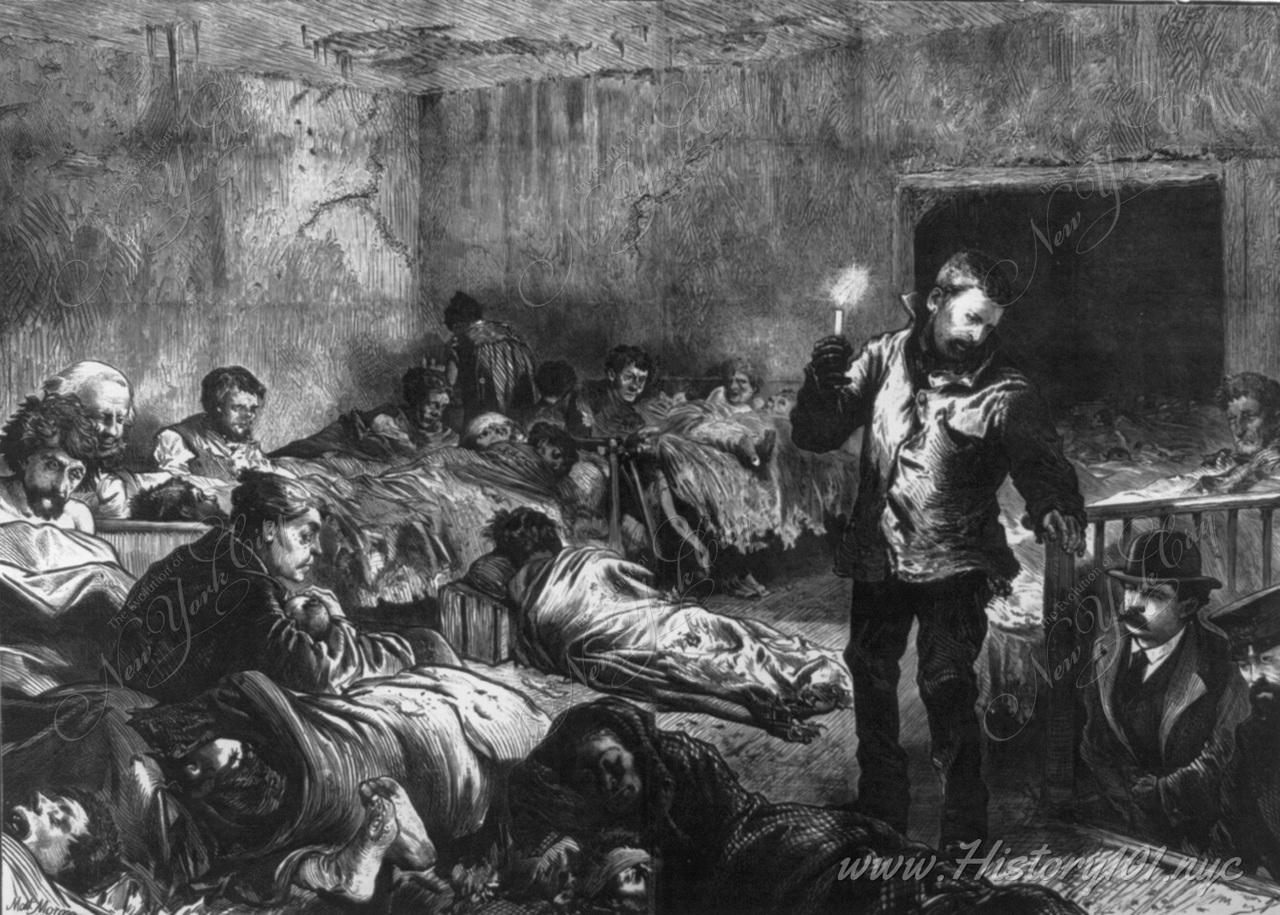 1872: Water Street Lodging for the Homeless

A portrait drawn from life by Matt Morgan depicting his midnight visit to one of the cheap lodging houses in Water Street. 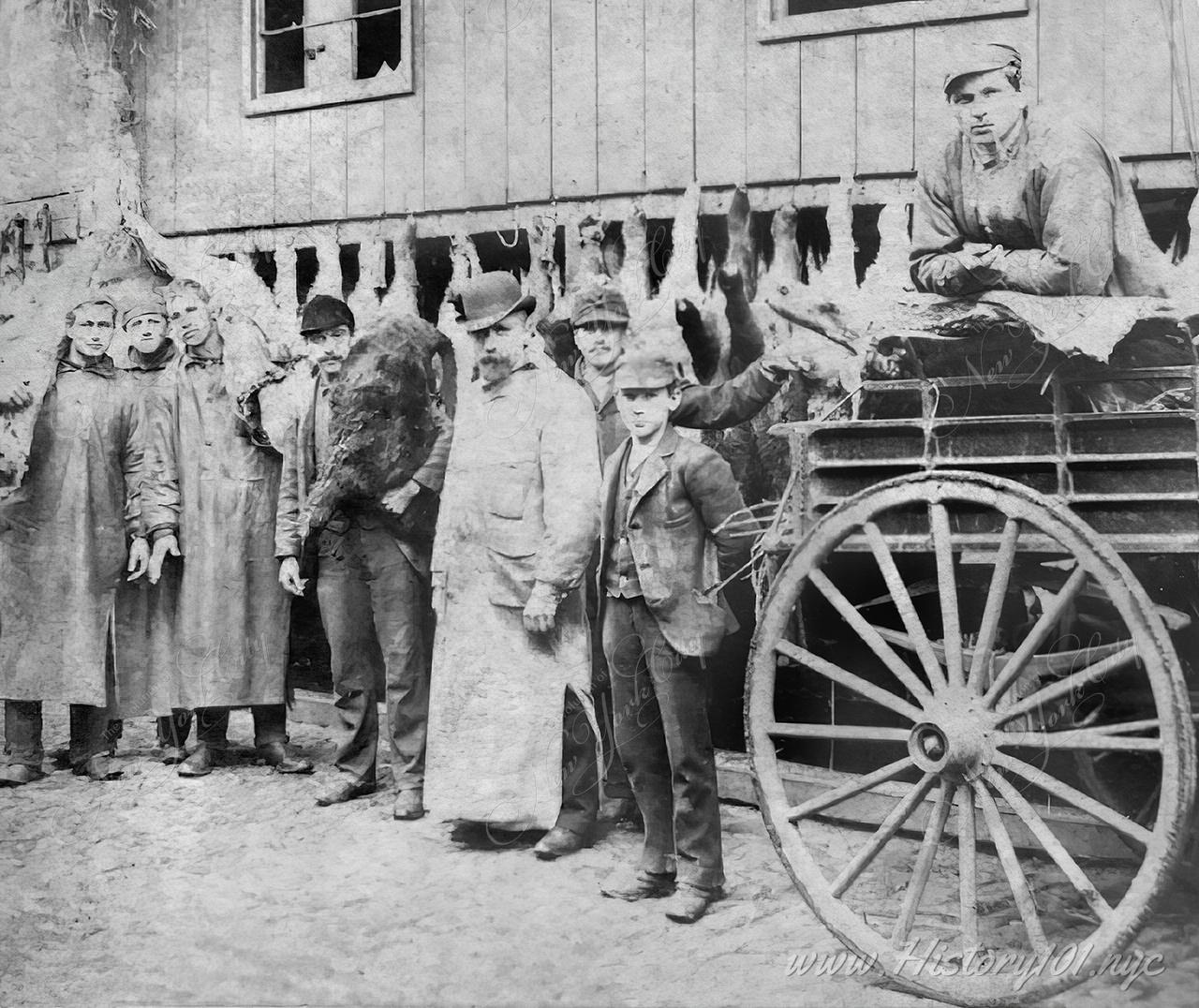 A group of butchers pose together in front of their shop in what is known today as Tribeca. 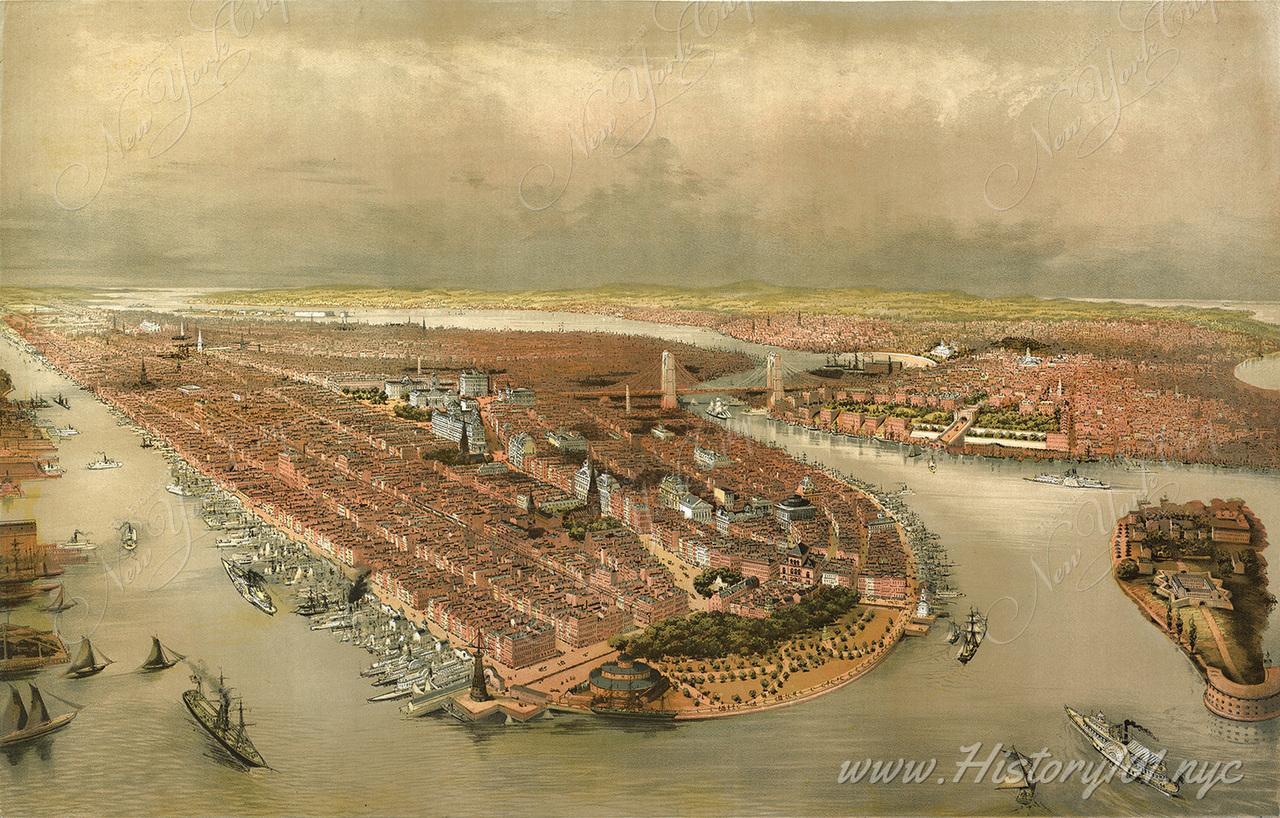 Elevated perspective of New York showing the waterfront, Brooklyn Bridge, with Battery Park and Governors Island in the foreground

Artist Credit: George Schlegel. Reprinted with permission.
← Previous 1 2 Next →
Click Here to View All 29 Images on One Page ↑ Go Back to Top

The 1880's NYC would see increased commerce and growth in outer boroughs with the completion of both the Brooklyn and George Washington Bridges. Other iconic moments during this... Continue Reading